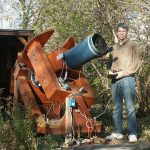 The night I took video to create these image was one of a handful I experienced this Summer with very good seeing (for Vermont).

I would say these are among the best images of Jupiter that I have produced, though I don’t plan to check. The fine scale seeing was steady enough that I could make out the disks of Jupiter’s Galilean moons visually. The large scale seeing, which causes the whole planet to jump around was much better than usual as well and helped minimize blurring.
The video clips used were all about 1 minute long (~3600 frames).

I lucked out with all the activity going on with Jupiter and it's moons starting with visibility of the Great Red Spot. Later the ingress of Europa on the disk about 10:45 PM, the ingress of Europa’s shadow at 12:14 AM and finally Io joining up with Ganymede for a family portrait.

Nice images Paul.  I took a couple as well.  I'll have to post them.

A contribution to this discussion from a couple of weeks ago. Not very good as I shoot over my house and the air is very turbulent.